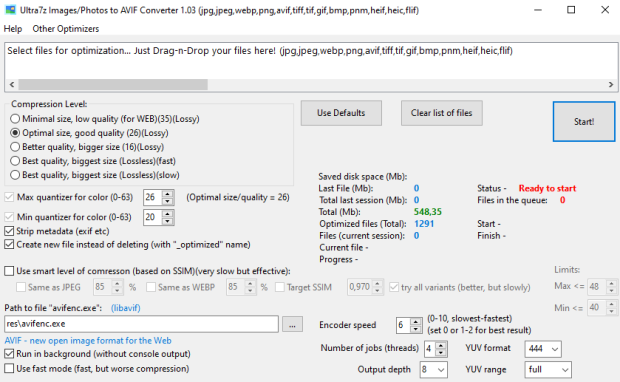 Convert your pictures JPEG/PNG/WEBP to smaller AVIF files (up to 10-50%)! High compression ratio — better than your programs / photo camera or smartphone. AVIF is a modern image format that provides superior lossy compression for images on the web. Using AVIF, webmasters and web developers can create smaller, richer images that make the web faster. It uses program avifenc.exe from LibAvif. Batch processing of files (drag-n-drop). Reduce the size of your image files in one click with ot without quality loss! Program optimizes your file to new one with «_optimized» name ending (source file will remain intact). Option for smart level of compression (based on SSIM). AVIF images are 50% smaller in size compared to JPEG and 20% to WEBP. Google Chrome released with full AVIF support.

AVIF — a modern image format based on the AV1 video format, ROYALTY-FREE, interoperable and open. AVIF is a combination of the HEIF ISO standard, and a royalty-free AV1 codec by Mozilla, Xiph, Google, Cisco, and many others.

It competes with HEIC which uses the same container format, build upon ISOBMFF, but HEVC for compression. Version 1.0 of the AVIF specification was finalized in February 2019.

It compresses images significantly better than older-generation formats such as WebP and JPEG. It’s supported in Chrome desktop today, and support is coming to other Chromium-based browsers, as well as Firefox. More than a half of an average website’s bandwidth is spent on images. Improved image compression can save bandwidth and improve overall performance of the web.

AVIF is natively supported in Google Chrome and by many other tools and software libraries. Developers have also added support to a variety of image editing tools.

On 14 December 2018 Netflix published the first .avif sample images, and support was added in VLC. Microsoft announced support with the Windows 10 «19H1» preview release, including support in File Explorer, Paint and multiple APIs, together with sample images. Paint.net added support for opening AVIF files in September 2019 and the ability to save AVIF format images in an August 2020 update. GIMP plugin implementation has been developed supporting both 3.x and 2.10.x plugin APIs. Native AVIF import and export was added to GIMP in October 2020.

In August 2020, Google Chrome version 85 was released with full AVIF support. Mozilla is working on support for the image format in Firefox. Cloudflare announced AVIF support in a blog post on 3 October 2020.

One of the big things AVIF does is it fixes WebP’s biggest flaws. WebP is over 10 years old, and AVIF is a major upgrade over the WebP format. These two formats are technically related: they’re both based on a video codec from the VPx family. WebP uses the old VP8 version, while AVIF is based on AV1, which is the next generation after VP10.

WebP is limited to 8-bit color depth, and in its best-compressing mode of operation, it can only store color at half of the image’s resolution (known as chroma subsampling). This causes edges of saturated colors to be smudged or pixelated in WebP. AVIF supports 10- and 12-bit color at full resolution, and high dynamic range (HDR).

Run only 1 active instance of the program!

Current file has its own status in the list: «running», «done» and «saved space».
Full stats:
1. Number of optimized files (total and current session).
2. Files in the queue (quantity).
3. Saved disk space (Mb) total and for each file in the list.
(You need to save files «res\size.txt» and «res\numbers.txt» before updating, if you want to save the overall statistics («Total»)).

You can specify the path to the file «avifenc.exe» manually in a separate form.

Program uses ImageMagick for pre-convert of input files and for SSIM calculation.

If you like my program and you want help improve it, you can help me (donate) here.

Icon made by Freepik from Flaticon.com
https://www.flaticon.com/authors/freepik